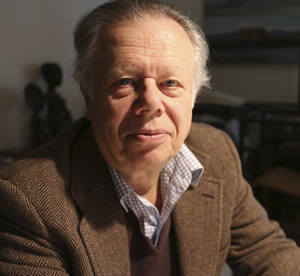 The distinguished author will be principal speaker at the 23rd Mississippi Delta Tennessee Williams Festival Oct. 2-3, according to festival board members.

“Having Mr. Lahr here is extraordinary; he is in great demand, and this is a rare opportunity for our area,” said Judy Flowers, former festival director.

”Following several months of suspense, we recently received confirmation of his plans from Megan Beatie, his publicist,” she continued.

Tennessee Williams: Mad Pilgrimage of the Flesh - was picked among the best books of the year in USA Today, The Wall Street Journal, The Los Angeles Times, The Chicago Tribune, The Boston Globe, The Sunday Times, Kirkus Service Publishers Weekly.

The first volume by Leverich was introduced in Clarksdale in 1995 when the Tennessee Williams postage stamp was unveiled here by the U.S. Postal Service in a unique ceremony in the historic district on the vintage front porch of Tom and Fran Ross.

Tennessee Williams scholar Kenneth Holditch of New Orleans, one of the festival’s original consultants, says Lahr’s biography “is beautifully written, in a prose that draws you in and leaves you unwilling to put the volume down.”

“The years John Lahr has spent on this project have been rewarded with a volume that anyone interested in the life or work of our major dramatist can hardly find fault,” he continues.

“For those who know little or nothing of Williams, this is the place to start, and for scholars and other devotees of the plays, there is a lot more to be gleaned from Lahr’s work,” continues Holditch

“It is an amazing account not only of the physical facts of the playwright’s life but also a perceptive and sensitive study of the emotional and psychological elements of Tennessee’s life from his early years in Mississippi to his years as a famous figure and a major force in the history of world drama.”

Lahr, the British-based American theatre critic is a graduate of Yale with a master’s degree from Worcester College, Oxford. He is the son of actor Bert Lahr and has written 20 books including Notes on a Cowardly Lion.

In 2002 he became the first drama critic ever to win a Tony Award for his part in writing actress Elaine Stritch’s one-woman show. Twice he won the George Jean Nathan Award for Dramatic Criticism.

In 1994 Lahr published a profile in The New Yorker about an executor of playwright Tennessee Williams’s estate that helped free Lyle Leverich’s biography from a legal battle.

Leverich, who helped launch Clarksdale’s Williams Festival in 1993 died while working on a second volume of his biography but had named Lahr as his favored successor.

Agreeing to complete the second volume, Lahr said in 2007 he was taking a half-year sabbatical from The New Yorker to work on the biography. The book was published Sept. 22, 2014.

Actress Helen Mirren calls Lahr’s book “A masterpiece about a genius. Only John Lahr, with his perceptions about the theatre, about writers, about poetry and about people could have written this book. What a marvelous read with brilliantly detailed research.”

Author John Guare asks, “Could this be the best theatre book I’ve ever read? It just might be. Tennessee Williams had two great pieces of luck. Elia Kazan to direct his work and now John Lahr to make thrilling sense of his life.”

In addition to the festival’s usual program of lectures, porch plays, Southern cuisine, blues and gospel music, the Friday night Meet and Greet reception in the Cutrer Mansion will include an  innovative production of The Glass Menagerie.

For more information and updates, visit the festival’s website: www.coahomacc.edu/twilliams